Metal Roofs are a very popular choice for people living in colder regions such as Minnesota because of its various advantages compared to asphalt shingles. Not only do they look great and have various benefits, but they also come in various options from steel, aluminum, copper or galvanized steel which gives a unique look to any residential or commercial buildings.

Benefits to upgrading to Metal Roofs In Cold Climate Areas:

Metal roofs are durable. They can sustain gusts up to 140 miles per hour and it will not corrode or crack. They also last longer compared to asphalt roofs. Asphalt roofs are known to last 20-years on average compared to metal roofs which can last up to 60 years.

When we talk about cold climates especially in regions like Minnesota, we cannot forget about snow. Hundreds of pounds of snow pile up in Minnesota residential and commercial roofs during winter. Metal roofs become an excellent choice for building owners as it becomes easier to shovel snow away on metal roofs. Also, snow slides right off the metal roofs in a clean sweep. Metal roofs also help reflect the sun’s heat which can reduce energy costs by 25%.

Metal roofs are durable and designed to efficiently shed snows during winter. Also, it is not uncommon to install metal roofs during a cold winter climate. Even if the weather is brutal, there might be challenges while installing a metal roof for roofers, but it is not impossible.

No matter what time of the year it is, metal roofs can be installed for your residential and commercial building. Once installed, unique looking metal roofs will stay in for a very long time taking care of your house from any brutal cold weather future has in store for your area.

Ice dams happen when the heated space below roofing loses heat through the roof and melts the snow. The melted snow then runs into the non-melted snow that is on the overhang portion of the roof which doesn’t melt due to the being at the ambient temperature. This is how ice dams are formed. As the snow continues to melt, the ice dam grows and makes its way under the roofing material and eventually causes water damage inside the home. Because metal roofs heat up and reflect the sun the roof overhangs will allow snow to melt or slide off. If the roof overhangs don’t have snow there is no concern for ice dams. Also, metal roofs typically have vertical seams which are far less prone to water infiltration.

How Much Does A New Roof Cost?

Extend the Life of Your Commercial Roof: 8 Simple Maintenance Steps 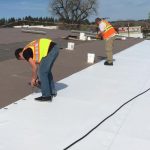 Why You’ll Never See Storm Group Roofing Use a Dumpster